On Friday night I went to the infamous David Guetta’s F**k Me I’m Famous party, I last attended this now worldwide brand party in 2015 when Guetta was at Pacha, back then I lasted only 15 mins due to fear of crowd control and being knocked out by Japanese tourists’ phones so I was hoping for a better experience 4 years later at Hi Ibiza as an older and wiser and seasoned Ibiza clubber..
Entering Hi Ibiza at half past midnight to an already heaving club, we went straight to the theatre main room with DJ Tom Staar, who had the ever-increasing crowd under his control with big room euphoric house sounds, dramatic drops and highs I was very soon aware this was going to be a night of high energy with a crowd who were definitely up for it! I wanted to see each room at the start and quickly moved on to the club room where Second City was playing, I enjoyed a few tracks in this quieter but still busy room and the DJ who I haven’t seen before was vibing out with what appeared to be a slightly older crowd, the music was tech house and slightly cooler sounds and quite a contrast to the main room.

Wandering around this huge Playa D’en Bossa nightclub which still gives hints of the hallowed Space Ibiza, I accidentally took a wrong turn and found myself in The Wild Corner.I was genuinely looking for the toilets which conveniently this music room has in them being the now famous loos with decks and a dance floor! We were met with a very energetic
Juanito Chanclas who was warming up for Resident Jason Bye. Juanito’s set was bangerlicious with the toilet crew enjoying the long drops and I don’t mean of the toilet kind.. every tune was sing along heaven for me and I didn’t want to leave that room. Bongo Ben was a fantastic accompaniment to the amazing music I heard, I felt like his hands were going to fall off the drumming was so vicarious!

I soon realised I was really getting quite squashed up against the toilet doors in the wild corner as it was getting busier as 1am approached, and as much as I wanted to stay and dance all night long to the amazing selecting of Café Mambo’s Jason Bye (who I think after Friday I can safely say is the ultimate master of the feel-good house music banger) I needed to see the main room again as the spectacle of the production there was next level.

Moving back into the theatre room the DJ changeover was happening with Disciples coming on. This British popular production trio have been regular players in the British charts with number 2 for their hit track ‘How Deep is your love’ and number 15 with the more recent 2017 ‘On my Mind’ which went off with copious amounts of Co2 clouds projected into the rammed room, with their text book deep commercial house offerings and slick mixing I really enjoyed this bouncy house set from the lads who looked like they were having the time of their lives up there. Super humble as they handed over to David Guetta. Now when I say handed over to David Guetta it wasn’t in the usual sense, there was a 5-minute‘ changeover’ time on the setlist sheet. In a scene not far removed from a West End Musical, stagehands and crew shuffled quickly and effectively around the stage removing the decks and sound systems. There was an ethereal white gauze hanging ceiling to stage where I could see the odd shadow movement which was an unintentional tease I think to the Frenchman’s grand entrance.I wasn’t far from suggesting to my friend it was going to be a magic show and Guetta was going to just appear from behind.. but no the build started and it was an immense climax which musically and cinematography wise was the tightest light show production I’ve seen at any dance music event and I’ve been to a few!
Guetta started with a medley of his hits and the baying mainly female 20-30’s front rows were snapping and insta storying every second. Highlights in the first 40 mins of the set included Guetta dropping ‘Firestarter’ which was coupled with an amazing light projection of flames on his LED square DJ booth which was simply epic. Bulletproof was a popular entry with the mostly female front line contingent going into a frenzy, I saw a lot of girls on video calls with people and Facebook lives too, such is the modern-day rave!

I managed an hour in the middle of the main room bouncing along to the last 10 years of Guetta’s hits getting pretty close to the strangers around me till I sought a time out and went to see my friend and local Ibiza legend DJ Paul Reynolds who had an unexpected double set as Idris Elba (who I actually organised the night around, ladies you’ll appreciate why) was stuck in the UK due to the terrible storms we had last week and his flights were canceled. Although disappointed not to look at I mean hear Idris, Paul was a brilliant replacement for his slot and the time I spent in the room was textbook crowd control and Paul had the ravers in the palm of his hand with great music and energy even though it was 4am by this time I didn’t feel at all tired on Paul’s dance floor, this seasoned Ibiza DJ knows his music and you know you are in safe hands for a great night in his room.
I ventured back to the wild corner to say bye to Jason Bye but was kept in there again by his tunes including my person favourite Barbara Tuckers Precious Love. 3 hours later the room was still rammed tunes were still as good and Jason is like a Duracell bunny!

All in all a great night it took three days for my body and ears to recover from the dancing and volume but it was totally worth it. David Guetta is still the master of commercial house and his team should be applauded for the fantastic production for sure the best I’ve seen all season in Ibiza. I’m back next week for more it was that good. If you like your house bouncy and big room they FMIF is the one to go to. Friday’s at Hi Ibiza till October. Thanks to Ana and the Hi Press team for the invite.

Cleaning the sea with the iBi Foundation 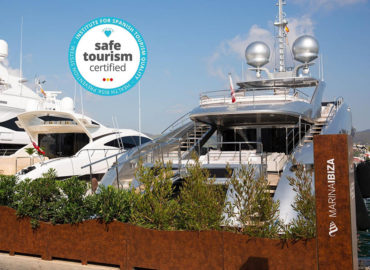 Marina Ibiza is certified as a Safe Tourism